Conquerors and kings – The Norman Conquest and Edward’s ‘Iron Ring’

Visiting a castle is the quintessential British day out. But did you know that before 1066 and the Norman Conquest, there were very few castles in Britain?

The Norman Conquest and the later Edwardian Conquest of Wales played a big part in shaping the Great Britain we know today – not just the landscape and architecture, but even the beginnings of our love of wine and our use of surnames. To celebrate the 950th anniversary of the Battle of Hastings, we’ve hand-picked 13 spectacular castles, abbeys and historic sites where you can discover the living legacies of these conquerors and kings on a short weekend break away this autumn… William the Conqueror (by now King William) gathered his troops at Old Sarum in 1070, after his campaign in Northern England. The Normans erected a motte and bailey castle and a cathedral on this ancient site near Stonehenge, within the grounds of an existing Iron Age hillfort and bustling settlement. The cathedral was damaged by storms and moved to Salisbury in 1222 and the castle was demolished by order of Edward II in 1322. The ruins of the cathedral, castle and ramparts make for a fascinating visit.

Milford Hall, in the heart of medieval Salisbury, is 1.5 miles (5 min drive) from Old Sarum. The Grade I listed Colchester Castle in Essex is a fantastically well-preserved example of a Norman castle. It was built soon after the Norman Conquest, on the ruins of the Roman Temple of Claudius. Bishop Gundulf of Rochester who supervised the castle’s construction, also built the world-famous White Tower of London (see below). He was operating on direct orders of King William, who wanted a stone castle midway between London and East Anglia. The castle also boasts a museum of archaeological treasures.

Hintlesham Hall, near the historic waterfront town of Ipswich, is 17.5 miles (30 min drive) from Colchester Castle. Travel in the footsteps of kings and queens by taking a boat trip down the Thames from Richmond to the Tower of London. Arguably the most famous (and notorious) of all English castles, it has played a key part in English history down the centuries. The iconic and imposing White Tower, which forms the centre of the site, was built by Gundulf at William the Conqueror’s behest in 1078 and was reviled as a symbol of oppression by his new Anglo-Saxon subjects.

Where to stay: The Lensbury, Richmond

The Lensbury, on the banks of the River Thames, is 16.5 miles (35 min by train to London Waterloo) from the Tower of London. Totnes Castle in Devon is a classic example of a Norman motte and bailey castle, which were wooden or stone keeps built on a mound and surrounded by a ditch. It was first built by one of William the Conqueror’s lieutenants, Juhel of Totnes, to assert his authority over his new barony. It had fallen into ruins by the 14th Century, and despite some restoration work during the period, it fell into disuse again after the Wars of the Roses (1455-1487).

Dartington Hall, on the banks of the River Dart, is 2.5 miles (5 min drive) from Totnes Castle. William the Conqueror rewarded his supporters with lands along the borders of Wales. Hundreds of small castles were built in the region by Norman lords like Hamelin de Ballon, who built Abergavenny Castle around 1087. It was rebuilt several times and the town was sacked by Welsh forces in 1404. The Castle was partly destroyed on the orders of Charles I in the English Civil War. The hilltop ruins overlook the bustling market town of Abergavenny and are well worth a visit, not least for their impressive views beyond the town towards the Brecon Beacons. Also nearby are the ruins of Crickhowell Castle (c 1100s) and Tretower Castle (c. 1200s).

Gliffaes Country House, at the gateway to the Black Mountains, is 10 miles (20 min drive) from Abergavenny Castle. The grandeur and ambition of the architecture at Norwich Cathedral will take your breath away. It was first built by the Normans in the early 12th Century, on the site of an Anglo Saxon settlement, and the Norman Cathedral tower is still in place today. Its sweeping Romanesque cloisters were built between 1297 and 1430. Norwich Castle also dates back to the Norman period.

Maids Head, opposite the Cathedral, is 150 metres (2 min walk) from Norwich Cathedral. Looming over the River Wye, Goodrich Castle boasts both spectacular views and one of the best-preserved Norman-era castles in Britain. It’s not hard to see why its likely first owner, Anglo-Saxon landowner Godric of Mappestone, chose this spot. Its imposing keep was added in the 12th Century to guard against Welsh raiders crossing the River Wye. It was the site of a notorious siege during the English Civil War, and cannonballs from the siege were discovered there in 2010 (you can see them on display).

Brooks Country House, at the gateway to the Forest of Dean, is 4.5 miles (10 min drive) from Goodrich Castle.

Dover Castle has one of the most spectacular settings of any English castle. Perched above the White Cliffs, the imposing fortress can be seen from the sea and is known as the ‘Key to England’ because of its strategic location and vital role played in defending the realm down the centuries, including World War II when its secret tunnels were used as a command centre. The Norman conquerors did build there (and the site impressed King William), but the castle as visitors would recognise it today began to take shape in the 12th Century. These days, the well-preserved castle is maintained by English Heritage. Under William and the Norman kings, the bishop of Durham was one of the most powerful men in the land. England’s only prince-bishop was granted exceptional powers to guard the Northern border against Scottish invasion, including the ability to mint coins and hold a court of law. The Prince-Bishop ruled the roost from Auckland Castle in County Durham. The site originally held a manor house, and the castle as you would recognise today was built in the 12th-13th Centuries. History buffs are spoilt for choice in the area, with Durham Castle and Cathedral nearby. Furness Abbey is nestled in a lush valley in the Lake District. It was founded by Stephen, grandson of William the Conqueror, and later King of England (1135-1154). At its zenith, Furness Abbey was one of the wealthiest and most spectular abbeys in England, and a visit to the impressive ruins gives you a good idea of Norman architecture, thanks to its remaining archways. Like so many abbeys, it was largely destroyed by Henry VIII in the Reformation. If you want to see a Norman castle in its full glory, visit Hedingham. Probably the best-preserved Norman keep in England, this imposing castle was built in 1140 by Aubrey de Vere II, the first Lord Great Chamberlain of England. His father was William the Conqueror’s brother-in-law, and was awarded many lordships after the Battle of Hastings. His son built a castle here, on the site of a former Saxon home.

Where to stay: Stoke by Nayland Hotel, Golf & Spa, Suffolk 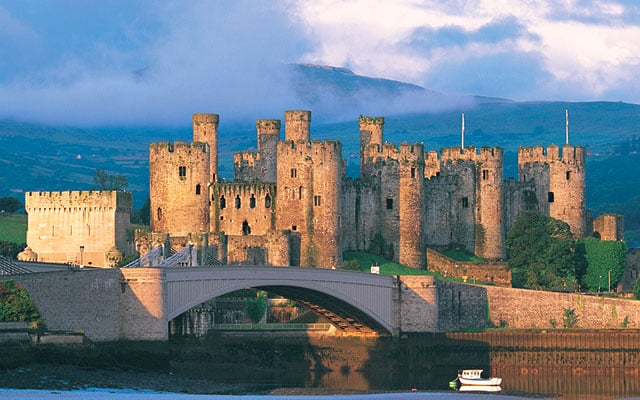 Conwy Castle is a UNESCO World Heritage Site, and considered one of the best examples of late-medieval military architecture in Europe. The formidable structure was built by Edward I in the late 13th Century on the North Wales coast, during his conquest of Wales. With its dramatic location on the edge of the Conway Estuary, Snowdonia looming in the background, you can certainly see how Conway’s imposing towers and barbican would have intimidated raiders.

The Imperial, on the promenade of Wales’ premier seaside resort, is 4.25 miles (10 min drive) from Conwy Castle. Edward I knew how to pick a great location for a castle. Harlech stands on top of a large rock, overlooking the Irish Sea to one side, and the mountains of Snowdonia to its rear. Harlech was one of Edward’s ‘Iron Ring’ – a group of strategically placed fortresses built after his invasion of Wales to keep the locals in check. It is now a UNESCO World Heritage Site.

Lake Vyrnwy Hotel, in a nature reserve on the banks of Lake Vyrnwy, is 46.5 miles (1h30 drive) from Harlech Castle

So, climb the ramparts that once encircled King William. Look up in awe at some of the finest examples of Norman architecture in Europe. And discover Edward I’s legacy in castles throughout Wales.